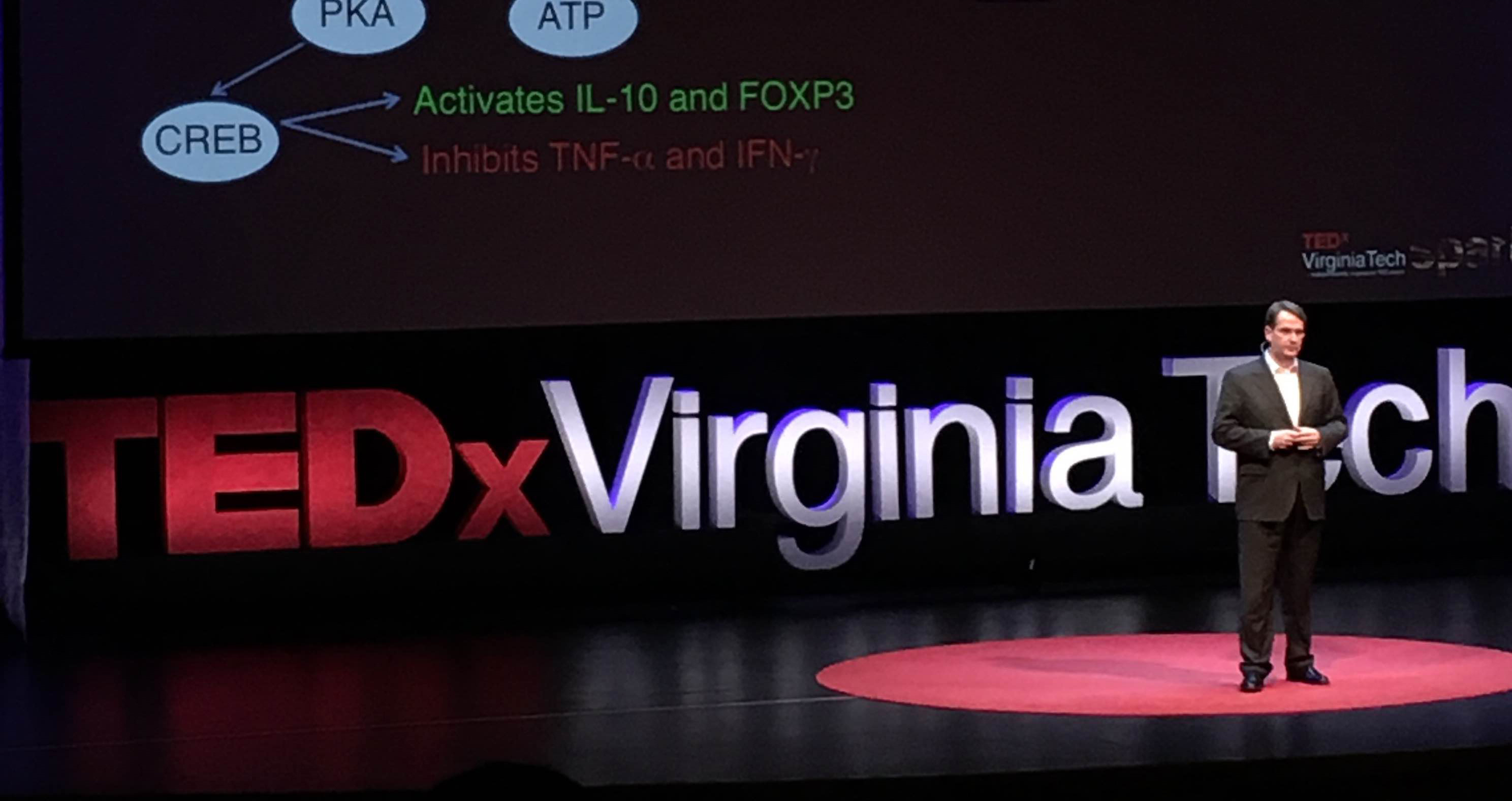 BLACKSBURG, VA, November 15, 2016 – Last Friday, more than 600 people heard a message of hope and inspiration from Dr. Josep Bassaganya-Riera who presented his TEDx talk about the sparks of inspiration that led to the discoveries of new pathways, including the lanthionine synthetase C-like 2 (LANCL2) pathway, to treatment for millions suffering from inflammatory bowel disease (IBD) throughout the world.

Bassaganya-Riera spoke at the Moss Center for the Arts about the moment of inspiration that set him on a new life journey, in line with the theme of the evening, “Spark.”

“How many of us have shunned, rejected or ignored medication because, ‘the treatment is worse than the disease?’” asked Bassaganya-Riera. “How many of us have taken anti-inflammatory drugs only to experience side effects as bad as our disease symptoms?” He explained to the audience that things are about to change in the area of treatment for diseases of the gut. Breakthroughs in precision medicine and health now in development at BioTherapeutics Inc. (BTI), the company Bassaganya-Riera founded in order to bring his discoveries to the public, will soon change the experiences of those of us suffering from inflammatory diseases. And, these changes will profoundly transform the global drug development landscape forever.

Bassaganya-Riera’s TEDx talk, Accelerated Path to Cures, outlined the future of precision medicine and health for inflammatory diseases with unmet clinical needs such as IBD with its two clinical manifestations: Crohn’s disease and ulcerative colitis.

For Bassaganya-Riera, there have been many sparks in his long scientific career, but the two he discussed during his talk are the application of nutritional immunology to help address unmet clinical needs for safer and more effective treatments, and the application of transdisciplinary computational modeling methods to dissect and comprehend complex massively interacting biological systems such as the immune system and the gut.

Bassaganya-Riera’s team used modeling approaches to identify a new therapeutic target for IBD—LANCL2. Next, they developed a new drug, known as BT-11 to pharmacologically engage the receptor and elicit anti-inflammatory responses in the gut. LANCL2 activation by BT-11 intercepts IBD by decreasing the production of inflammatory mediators and increasing anti-inflammatory molecules in the gut.

Dr. Bassaganya-Riera explained how artificial intelligence approaches are taking his team one step closer to the next generation of human clinical trials, enabling smarter, faster, more accurate and precise decisions. Using avatars of Crohn’s disease patients, modeling information on the electronic health records, demographic information and immunological data, they have tested new drugs through computer simulations before the drug is tested in humans.

“It was an honor and privilege to be nominated for the 2016 TEDx Virginia Tech talk and to showcase our Accelerated Path to Cures. We have embarked on a journey to cure not only the disease and discomfort caused by IBD but to cure the inefficiency of the drug development process,” said Bassaganya-Riera, BTI’s President and CEO. “In the next few months we will finalize investigational new drug-enabling studies and initiate human clinical testing of BT-11.”

About LANDOS – Accelerated Path to Cures

The LANDOS (for LANCL2 technology) program at BioTherapeutics develops first-in-class oral therapeutics for inflammatory bowel disease (IBD), ulcerative colitis and Crohn’s disease, by applying multifaceted approaches that synergistically combine the power of computational modeling with nonclinical and clinical experimentation to accelerate the path to safer and more effective treatments for debilitating and widespread human diseases that afflict millions of people worldwide.